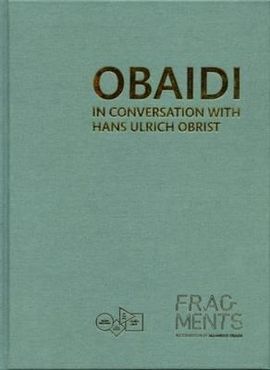 Mahmoud Obaidi's work encompasses sculpture, conceptual objects, film and painting; a series of politically-charged fragments which are brought together within this publication.

Born in Iraq in 1966, Mahmoud Obaidi's artistic career is marked by transition, conflict, fragmentation and exile. Encompassing sculpture, conceptual objects, film and painting, his work is a series of politically-charged fragments which are herewith brought together within this publication and exhibition.

This book captures the multiple elements that constitute Obaidi's work. In addition to literature, film, music and installation, he has also embarked on architectural projects, such as the Al Jazeera headquarters in Doha where he produced drawings and worked with civil engineers to design this structure.

War, terrorism, pollution and ecology are just some of the topics that are filtered through his work. The central display structure of the exhibition - the rope - evokes Duchamp's Twine (1942), which is here re-purposed into the precarious connecting device that holds each element together. As is always present within Obaidi's work, however, connection and unity has the potential to be broken through war and its capacity to segregate and isolate. The taut rope holding everything together is quickly broken with the cut of a knife.