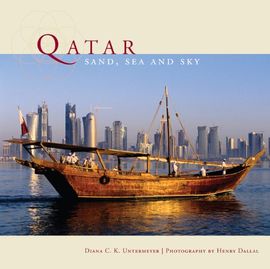 Qatar occupies a thumb of land that extends off the Arabian Peninsula into the Persian Gulf. This nation, though small in size, represents more than a strategic geographical location-it is uniquely beautiful and culturally rich. Qatar: Sand, Sea and Sky is an overview of the country and its journey into modernity while it preserves the duality of its culture as a desert by the sea. Stunning photography pairs with informative and personal text by the wife of the most recent United States ambassador to Qatar to give Westerners traveling to Qatar on business or for World Cup preparations an inside understanding of this moderate Muslim country and the way it attempts to become modern and engaged with the world without losing its heritage. It includes an introduction by Sheikha Al Mayassa bint Hamad bin Khalifa Al-Thani, current chair of the Qatari Foundation Reach Out to Asia and daughter of Sheikh Hamad bin Khalifa Al-Thani, the current Emir of Qatar.
About the Author:

Diana Untermeyer worked in the White House during the George H. W. Bush administration and at the Christ Church Cathedral in Houston before moving to Qatar as the ambassador's wife. There she forged strong relationships with the ruling family through their mutual love of horses. This book is endorsed by many of the major institutions affiliated with Qatar.